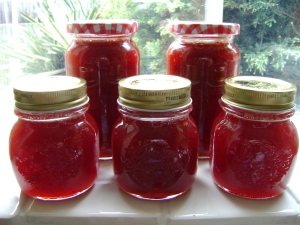 Summer is imminent in the UK when locally grown strawberries start to appear in the stores, (despite all the bad weather jokes!). We do live in an age where strawberries are available all year round but it’s not the same. I do not associate strawberries with Winter, I’ve moved on to the clementine then! Besides, when grown in a Spanish polytunnel, strawberries (in my opinion)  do not taste very strawberryish.

I have been making strawberry jam for years, mostly the only ingredients I used were strawberries and sugar but since tweeting &  blogging Ive come across jam with all sorts of other ingredients added (alcohol, vinegar, spices).  I realised what a sheltered kitchen I lived in!! So this year I was a little more adventurous and included some black pepper which is supposed to bring out the strawberry in the strawberry! I also added vanilla, well just because! I was probably a little conservative in my pepper and vanilla additions as I didn’t follow a recipe.

Despite my general conservatism, when making jam I rarely follow a recipe. After years of looking through jam recipes that were all so confusingly similar I gave up and now my starting point tends to be weighing the  fruit, then adding slightly less in weight of sugar. I’ve made really small batches before resulting in only one and a bit jars because that’s all the fruit I happened to have! In the UK we have “jam sugar” which has added  pectin for setting purposes, I havent come across a reason not to use this but I prefer to use regular sugar (I like unrefined). As a result this strawberry jam is quite a soft set, more of a conserve.

Water bath canning is not a common process in the UK but now I’ve tried it I like it. I don’t have a canner but successfully use my largest stock pot filled with water.

This entry was posted on June 17, 2011, 15:41 and is filed under Uncategorized. You can follow any responses to this entry through RSS 2.0. You can leave a response, or trackback from your own site.