Tomorrow I will have been blogging for roughly a year, that is not something I ever thought I would hear myself say! I say roughly as I started a blog with posterous but didn’t get on with it so after just a few weeks on November 14th I moved over to WordPress.  Never in my wildest dreams did I think I would have a blog much less anyone read it! Well that last sentence may be debatable!! While I still have much to learn its been a blast and thank you to those of you who have shared it with me!

One person that was a great inspiration to me when I first started blogging is Cathy, otherwise known as Mrs Wheelbarrow and its her recipe for Slivovitz that I want to share with you today.  On a whim I just happened to have bought some damsons that I had no idea what to do with.  Cathy’s timely post for Slivovitz was all the inspiration I needed!

Slivovitz is a plum schnapps made in Eastern Europe. I’d had success with making Limoncello earlier in the year and as the Slivovitz takes 3 months of brewing it would be ready for Christmas which seemed perfect. The plums are left whole, (Cathy says that the pits are an important factor in the final product), pierced and left to steep in vodka with sugar in a large jar, so easy!

I should have written this post at the time of making the Slivovitz when damsons were in season but never having tasted it before I didn’t dare! Well in the interests of writing this post I tasted it a little early and its good! Its sweet and warming and very drinkable! It will make a lovely winter tipple or gift. Although too late to for you to make for this Christmas it’s well worth saving the idea for next year! I also meant to do this post a little earlier to take some along to  Vanessa Kimbell’s (the person who encouraged me to start a blog!) Lets Make Christmas food bloggers gift swap but I fear I’ve missed the deadline!  One thing I must improve on with my blogging is actually getting the post written! Wish me luck with that, and in the meantime.. Cheers!

An update – I will now be bringing this to Lets Make Christmas!

A second update, I’ve never done 2 updates before and am not sure if “one does that” but I had to share! My slivovitz won the alcohol category at the Lets Make Christmas food bloggers gift swap! I’m so happy, excited, shocked! Truly I went along simply to meet other bloggers and swap a gift, I never expected for a minute that I may be in with a chance of winning anything, the quality of the food gifts was outstanding as was the company! Thanks to Leiths School of Food and Wine for the Champagne tasting I won! Also many thanks to Vanessa for organising such a wonderful event and Dan Lepard for his judging!

Slivovitz (from this recipe from Mrs Wheelbarrow’s Kitchen) 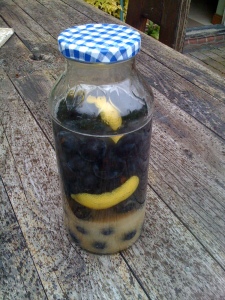 This entry was posted on November 13, 2011, 17:56 and is filed under Uncategorized. You can follow any responses to this entry through RSS 2.0. You can leave a response, or trackback from your own site.