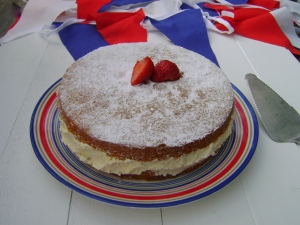 It’s the Jubilee weekend! I have had all year to plan what to make but in typical Jayne style I left it until the last-minute!  The rest of my life is fairly organised, I’m a lover of lists but for some reason when it comes to cooking I’m more relaxed and often do things at the last-minute, quickly flicking through one of my cookery books minutes before going to the supermarket looking for something new to try. If you come to dinner at my house you will most likely be served a meal that I have never made before! For the Jubilee weekend I wanted to make a cake, something traditional, something with a royal tone. I decide to make a Victoria sponge, strangely a cake that I don’t make all that often, I do like it, it’s just often overlooked while I’m trying other recipes, so many cakes so little time! The Victoria sponge is indeed named after Queen Victoria and was apparently created by her lady in waiting, the Duchess of Bedford, who is also said to have started the English afternoon tea tradition. It seemed fitting then that I celebrated the Diamond Jubilee with a cake that was originally made for a Queen!

This recipe is the one used by my friend Pearl, she makes a wonderful Victoria sponge, her cake rises so well and is wonderfully light. Where Victoria sponge is concerned I think the recipe is pretty standard. Traditionally the filling was just jam but I wanted something a little more fancy so added cream, decadence seemed the order of the day! 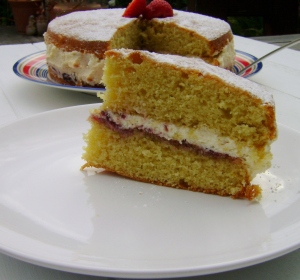 This entry was posted on June 2, 2012, 18:59 and is filed under Baking, dessert, Uncategorized. You can follow any responses to this entry through RSS 2.0. You can leave a response, or trackback from your own site.