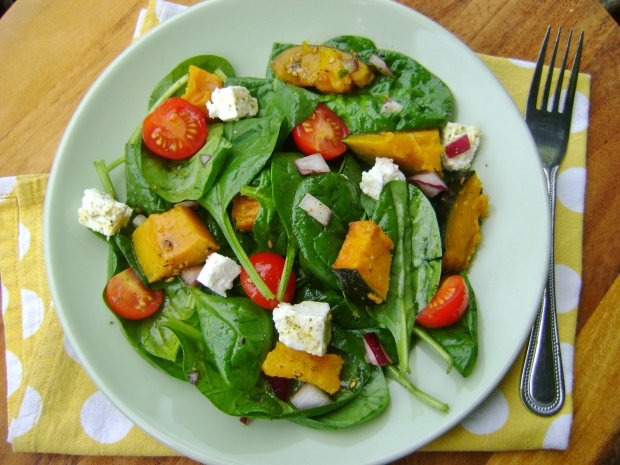 Pumpkins were one of the successes on our allotment this year, although we didn’t grow a gigantic prize winner we did get a lot of smaller, more edible types, I grew 2 varieties this year Bon Bon which was a small variety and Musquee de Provence. Actually after buying my seeds I realised both were classed as squash, but squash or pumpkin they are used in the same way and any kind of pumpkin or squash will work here. I decided to try a Bon Bon first, its only small so was easy to use up, I simply sliced and roasted it. On its own served as a vegetable it was great, a really good tasting pumpkin with a nice texture. Even though it was only a small pumpkin there was still enough for several meals so the next day I made up this salad, it was so good I made it the day after too!

I love pumpkin in salad it lends itself to any flavour dressing and adds some autumn richness, salads feel as they ought to be more substantial now the weather is colder. I used za’atar in my dressing. Za’atar is a middle eastern herb blend containing marjoram, oregano, sesame seeds, sumac and salt. As well as using it in salad dressing I like to scatter it over roasted vegetables. It’s also lovely sprinkled over hummus. Za’atar is a handy herb blend to have in your cupboard.

This salad is great for lunch with the pumpkin either warm or cold. It would make a great starter served on a large platter with the pumpkin still warm from roasting. The feta cheese is an option but if you want to cut some calories or make this salad more paleo/vegan friendly leave it out.

This entry was posted on November 10, 2013, 14:00 and is filed under Uncategorized. You can follow any responses to this entry through RSS 2.0. You can leave a response, or trackback from your own site.