Posted by Jayne in Food gifts, Jams and Chutneys on January 11, 2013 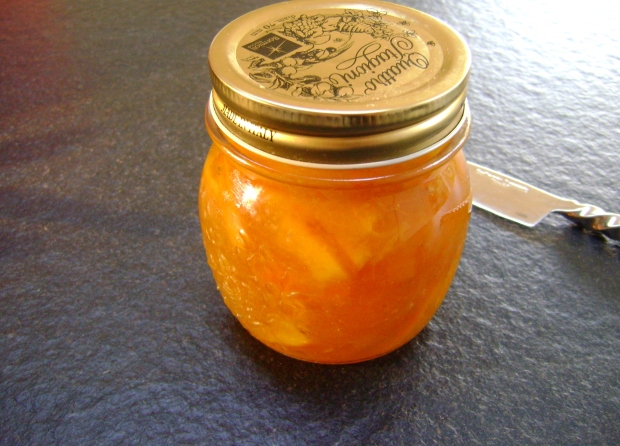 Id never tried bergamot oranges before, to be honest I hadn’t ever seen them for sale. I do enjoy a new discovery, so when I saw them I had to get some! Its marmalade time so that was what my bergamot oranges were destined for. Once Id tasted one, however, it was apparent that was all I could use them for!  They look pretty unremarkable, like unripe oranges, although any similarity to oranges ends there,  I was taken aback at how bitter they are! I can be found nibbling at the lemon in my drink but the bitterness of bergamots was something else! They have a just shy of harsh floral smell, apparently bergamots are what gives Earl Grey tea its distinctive aroma.

Coincidentally the day I bought my oranges someone tweeted this video about making marmalade by Jane Hassell-McCosh, the founder of the Worlds Original Marmalade awards. (Don’t you just love twitter!) It’s a lovely video, shot in Jane’s kitchen where she talks you through making marmalade in a way that I hadn’t tried before. I have never found a recipe for marmalade that I’ve stuck with. Unlike making jam, marmalade requires a bit more preparation, some recipes have you starting 2-3 days before! Well that doesn’t suit my impatient nature! Jane’s method was quicker and avoided using muslin to tie up pips and pith. Her easy guidance persuaded me to try making marmalade her way.

In the video Jane uses a mix of oranges, lemons and grapefruit.  She has an easy method of measuring the cooked fruit to sugar at a rate of 1 pint of fruit to 1 lb of sugar. This suited me as I was making a very small batch. Making marmalade this way was really easy and very successful! It set really easily, always a worry when making marmalade! That sour, bitter flavour accompanied by the heavy floral  fragrance made me worry what the marmalade would taste like so at the last moment I threw a regular orange in with it! I also added some extra sugar. I was glad I added that orange in with my bergamots, it added a familiar taste to an otherwise very different tasting marmalade. When trying this marmalade the first taste is just like marmalade made with Seville oranges then you bite into a piece of bergamot peel and you get a flowery, almost soapy hit (but not in a horrible way!)  my description may sound unfavourable but that is not the case, the combination of sweet, sour, and floral all work well together to make a very different marmalade. I really like it and wish Id been brave enough to make a larger batch. I got a jar and a half with my small batch, this recipe could easily be doubled.

I am linking this up with the One Ingredient challenge held by Laura at How to cook Good food and Nazima at Franglaise Kitchen as the theme for this month is Oranges.

The sugar needed may vary according to how much fruit pulp you measure.

As I messed with the sugar ratio and the recipe resulted in such a small amount I do not recommend this for canning.

Summer is imminent in the UK when locally grown strawberries start to appear in the stores, (despite all the bad weather jokes!). We do live in an age where strawberries are available all year round but it’s not the same. I do not associate strawberries with Winter, I’ve moved on to the clementine then! Besides, when grown in a Spanish polytunnel, strawberries (in my opinion)  do not taste very strawberryish.

I have been making strawberry jam for years, mostly the only ingredients I used were strawberries and sugar but since tweeting &  blogging Ive come across jam with all sorts of other ingredients added (alcohol, vinegar, spices).  I realised what a sheltered kitchen I lived in!! So this year I was a little more adventurous and included some black pepper which is supposed to bring out the strawberry in the strawberry! I also added vanilla, well just because! I was probably a little conservative in my pepper and vanilla additions as I didn’t follow a recipe.

Despite my general conservatism, when making jam I rarely follow a recipe. After years of looking through jam recipes that were all so confusingly similar I gave up and now my starting point tends to be weighing the  fruit, then adding slightly less in weight of sugar. I’ve made really small batches before resulting in only one and a bit jars because that’s all the fruit I happened to have! In the UK we have “jam sugar” which has added  pectin for setting purposes, I havent come across a reason not to use this but I prefer to use regular sugar (I like unrefined). As a result this strawberry jam is quite a soft set, more of a conserve.

Water bath canning is not a common process in the UK but now I’ve tried it I like it. I don’t have a canner but successfully use my largest stock pot filled with water.