Posted by Jayne in #TwelveLoaves, Baking on January 28, 2013 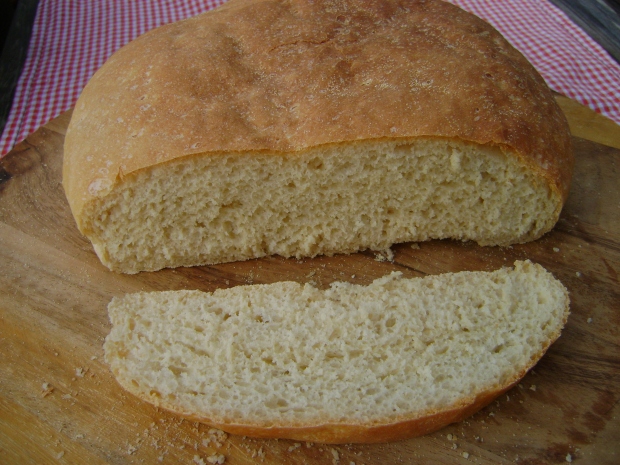 The #TwelveLoaves theme for January is all about a clean slate and keeping things simple. The perfect theme for January. I’ve tried a couple of loaves for this months challenge and had a little trouble,  the trouble was I was trying different whole grain flours. I think I was trying too hard, often something I suffer from! So out of the blue I bought some white bread flour, much to my husbands disappointment our house went wholemeal years ago!

I had much better success with this loaf! For the first time I made a soft, fluffy loaf of bread! It’s a perfectly simple loaf, and very well-behaved, rising as it should do even on a cold day. I often have raising issues when making bread, my house never seems to be warm enough. Needless to say my husband loved this simple white loaf, thus confirming his opinion that there is no bread better than white! I will be trying this recipe with wholemeal flour though, I’m determined to find a good loaf made with a whole grain flour!

Posted by Jayne in #TwelveLoaves, Baking on October 26, 2012

The theme for this months #Twelveloaves is grains and seeds. Easy (ish) I thought, the possibilities were endless but those of you who know me will know that I bake cakes and not a lot of bread! Its taken most of October for inspiration to come to me! I had a bag of wholegrain spelt flour in the cupboard, so that took care of the grain part. I’ve had success replacing wheat with spelt in quite a lot of my recipes, I’m beginning to see that wheat is overrated and also not that healthy (see this article for more information on that) so I’ve been looking for alternative grains to use. Spelt is apparently a little easier to digest and remains true to its origins, its missed out on a lot of the science that is sadly behind the wheat of today. Spelt flour easily replaces wheat flour, I just swap spelt for wheat flour and it works fine, no taste difference and things still rise if they need to. I’m not sure if you could replace the flour in a bread recipe for spelt like I have with cakes as so many bread recipes call for strong flour. So feeling a bit lost with my bag of spelt flour I turned to the Dovesfarm website for inspiration where I found this recipe. Their recipe uses half spelt and half whole wheat bread flour, I stuck with that but may try just spelt flour next time. I didn’t think my loaf tin would be large enough for their recipe so I halved it, I also swapped the vegetable oil for olive oil as that is what I had. As it is almost Halloween pumpkin seeds seemed fitting and for an added health boost I added linseeds, also called flax seeds.

Well that was the most novel way of toasting pumpkin seeds that I have tried! How do you get seeds to stay on top of a loaf? Mine looked great before it went in the oven, indeed when I took it out it looked good but the little tapping sound of the seeds hitting the floor as I carried the loaf from the oven to the counter was the first indication that the seeds had not stuck on. When it came to tipping the loaf out of the tin the rest of the seeds fell off! Despite the seeds missing from the top I was still happy with my loaf, it tasted good! It was quite a hearty loaf, perfect for this time of year! Thanks once again to #Twelveloaves I made bread!

To see the other loaves in this months #Twelveloaves or to take part yourself visit Barb at Creative Culinary, Jamie at Life’s a Feast or Lora at Cake Duchess